Fever curves are an interesting source of amusement for those that have the ability to collect the data.  This is especially true for those experiencing periodic fever or chills.

Paracetamol, acetominophen, propacetamol are inhibitors of cyclooxygenase  (Cox).  Some references suggest it might interact with the endocannabinoid system.     Dexibuprofen, like its more structurally heterogenous ibuprofen,  is a nonsteroidal anti-inflammatory drug (NSAID).  Cox is part of the pathway that converts arachindonic acid (AA) to the pro-inflammatory cytokine PGE2.

This study looked at fevers that accompany upper respiratory track infections (URTI) in children.  The kids were given oral dexibuprofen or intravenous propacetamol.  The rationale was that if a kid is vomiting, oral antipyretics are ineffective.   Auxillary (armpit) temperatures were recorded every 30 minutes.  This was an Equivalence Trial, a trial with the primary objective of showing that the response to intravenous propacetamol differs from oral Ibuprofen by an amount which is clinically unimportant. This is usually demonstrated by showing that the true treatment difference is likely to lie between a lower and an upper equivalence margin of clinically acceptable differences. 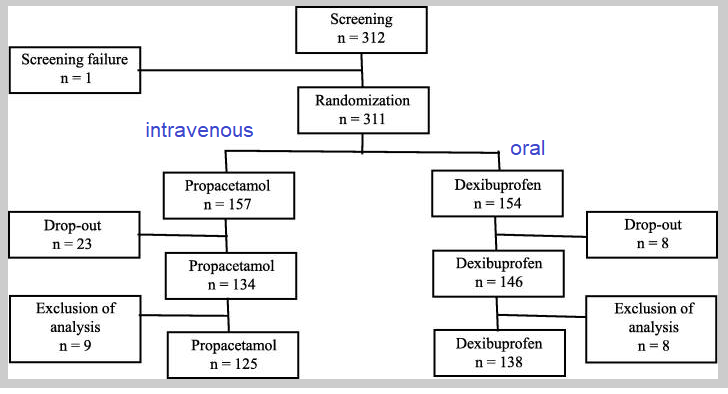 This is what a temperature curve looks like.  An attempt has been made to shade the area under the Dexibuprofen  curve (gray) versus the Propanecetamol (blue).  Notethat the X-axis is time and the Y-axis temperature.  The larger the area, the more time the child spends feverish.  Some studies on ClinicalTrials.gov like to use  37.0 °C for calculating area under the curve (AUC). 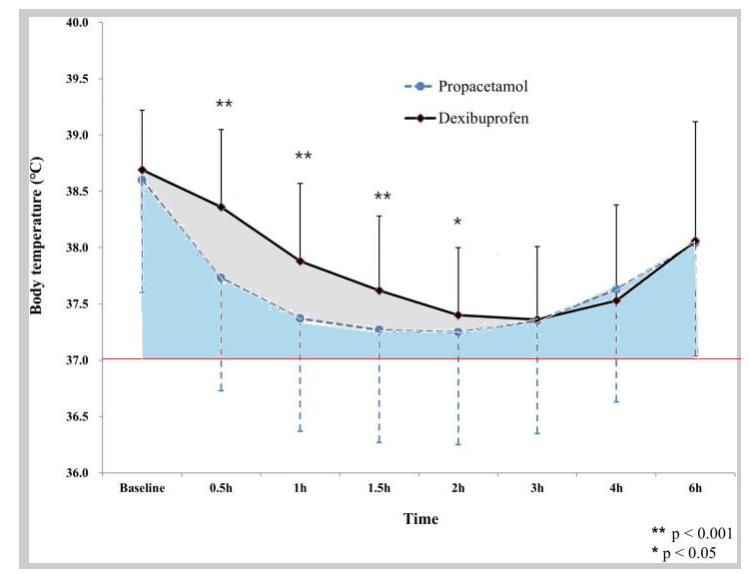 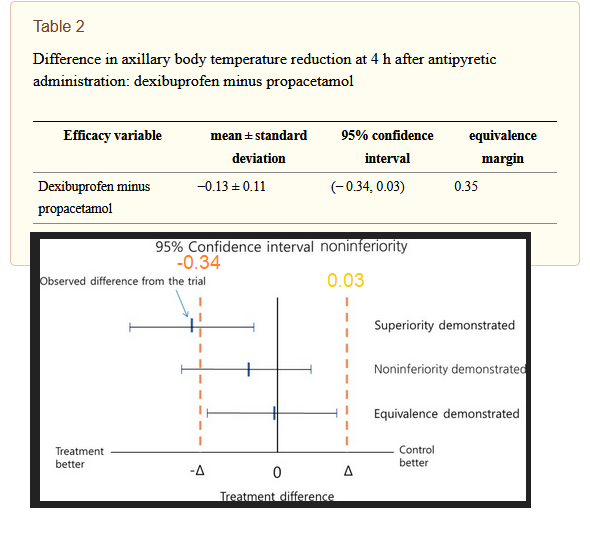 This study used tympanic temperatures measured every two hours.  Treatment was started within 24 hours from the onset of symptoms. Body temperatures were measured at 2-hour intervals during the first 24 hours, and at 6-hour intervals thereafter.  We don’t know how diurnal variations in body temperature came into play.  We can hypothesize that these patients were not getting a lot of natural sunlight to set their circadian rhythms into motion.

Clinical trials have primary and secondary measures to see if the tested intervention has the desired effect on the patient’s outcome.
The primary outcome was body temperature measured rectally at 24 hours from start of treatment. Secondary outcomes were change from baseline temperature at 1 and 5 days from start of treatment, and time with elevated body temperature (> 37.0°C) (area under the curve) during the first 24 hours and the first five days.

Patients could be included if they had

Without intervention, the tympanic temperature increases about 0.4 °C  in first 8-10 hours after recording, which places us at 8 to 34 hours after the stroke. After about 24 hours the temperature levels off to about 0.2 °C  above the starting point. 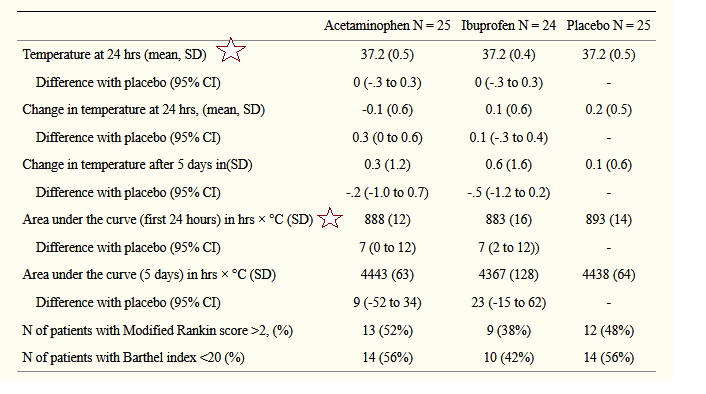 The Barthel Index is a measure of how much a patient needs help with aspects of daily life such as bathing and using the toilet.  A score of 20 is functional independence.  TheModified Rankin Score is also measures the functional impact of a stroke  A score of 2 indicates not back to normal but able to live independently.  A score of 5 indicates bedridden.

I like to write educational websites View more posts